Christian Science was introduced to my mother when I...

Later, when I was in my early twenties, I drifted away from Science and took up smoking and occasional social drinking. It wasn't until I met the man who was to become my husband that I seriously returned to the study and practice of Christian Science. He attended a branch church with me, and when he was healed of pneumonia through Christian Science, he became a student of Science. It was at this time that we were both healed of smoking and drinking. During the forty years of our marriage we had many proofs of God's loving care.

Send a comment to the editors
NEXT IN THIS ISSUE
Testimony of Healing
During my business career of many years, I held half a... 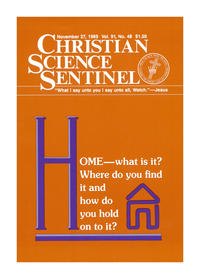