One night in 1983, I was stricken with a severe heart attack

One night in 1983, I was stricken with a severe heart attack. I was very frightened, and although I had relied on Christian Science for many years and had had numerous healings, this time I allowed myself to be taken to a hospital.

For a time I seemed to improve. After about two weeks, however, my condition deteriorated and I was placed in intensive care. On my arrival there, a number of the doctors who had been attending me, as well as several other doctors and some nurses, gathered around my bed. It was clear that they did not expect me to live. (I learned later that my sister had already been told that I was dying.) At this point I said to the hospital staff, "If you think I am going to die, I am going home." 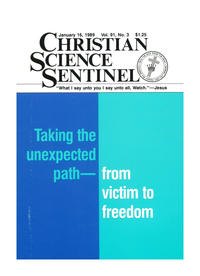