There's something everyone can do in a family

A Friend was telling me her parents had just got divorced. She said, "I grew up thinking that nothing could go wrong with my family. It isn't fair that nobody tells kids what could happen to the people they love."

I've thought a lot about what she meant, because there have been times when I felt the same way. But I'm not sure the only solution is to tell young people to expect the worst so they won't be so hurt. Instead, what would happen if we began to show them how to help their families face and heal the challenges that confront them? 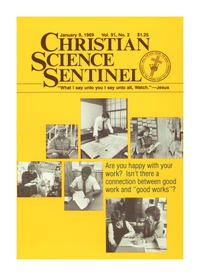