My mother had telephoned a Christian Science practitioner. After she hung up Mother came and told me that the woman at the other end of the line had said, "My dear, there is a great joy coming to you." She also said she would be visiting me the next day.

I had been ill for several years, and the various treatments tried by kindly doctors had failed to cure me. I was quite young and felt despairingly that a life of invalidism was all that lay ahead. A friend, who was not a Christian Scientist herself but knew someone who had been healed by it, had once suggested I try this Science, adding that there were Christian Science practitioners who gave their whole time to helping people through prayer. Eventually I reached the point where I was willing to try anything! It was then that my mother got the name of a nearby practitioner and made arrangements for her to visit me. 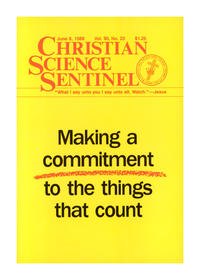