I was watching a nature program the other night. It told the story of a man who was employed by a cement company in East Africa. A quarry and a large area of land that had been worked by the company had been left desolate. They were just scars on the face of the earth. There were no signs of life, but this man decided that the land could be reclaimed. He organized the planting of quick-growing trees and shrubs, flooded the quarry with fresh water, and introduced fish into it.

Within eight years after the first planting, the trees had grown to forty feet and were teeming with birdlife, butterflies, and other insects. The fish had multiplied in the lake and had become a fine source of food. Monkeys, antelope, crocodiles, and even a hippopotamus were thriving in the area! Where formerly there had been wasteland, now there was a wildlife sanctuary for everyone to enjoy. 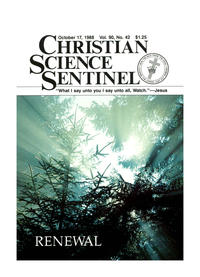