Law that can't be broken

The two-hundredth birthday celebration of the Constitution of the United States has produced more than fireworks displays. It has touched off some worldwide discussions of law and some skyrocketing, brilliant thought about achieving a lawful society.

But we still see around the globe far too much evidence of what could ironically be called a year of disregard for law. Terrorist acts. Urban gangs. Increasing drug traffic. Circumventing of law at high levels of government in the United States.

Send a comment to the editors
NEXT IN THIS ISSUE
Editorial
Is being good, dull? 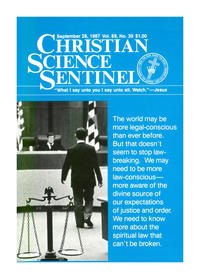