I never cease to be grateful that over fifty years ago, when in...

I never cease to be grateful that over fifty years ago, when in my early thirties, I was led to the wonderfully inspiring, releasing, and comforting truths revealed in Christian Science. Right from the start this Science seemed to me so logical, and I saw its practicality clearly demonstrated in business as well as in physical situations.

Christian Science has been so effective, in fact, that in over fifty years I had to be absent from work only twice. On the first occasion the person with whom I shared my office became ill with German measles one day, and when I arrived home I found myself manifesting the same symptoms that he had shown. I called a Christian Science practitioner for prayerful help, and the practitioner agreed to pray for me.

Send a comment to the editors
NEXT IN THIS ISSUE
Testimony of Healing
With each spiritual milestone—and there have been many—... 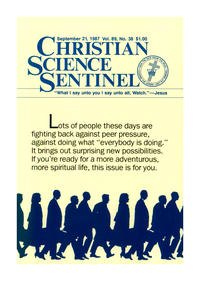