The freedom in choosing what is right

Two hundred years ago this summer, an assembly was meeting in Philadelphia. The delegates were in the midst of one of the most important deliberations concerning their new republic. The purpose: to draft the Constitution of the United States.

Over the years, the universal principles on which the Constitution was based have had a profound influence in shaping the forms of government in many parts of the world. The Constitution has provided a lasting model for preserving individual rights. And today, after standing the test of two centuries, that document remains a powerful symbol of freedom to millions of people—people of all races, of many different religions and creeds, of diverse ethnic and cultural backgrounds. It continues to serve as a touchstone for guiding a people's sense of justice, equity, and morality.

Send a comment to the editors
NEXT IN THIS ISSUE
Article
Talking snakes? 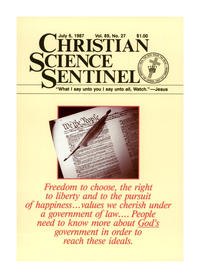