One Wednesday night I wanted to give a testimony at my...

One Wednesday night I wanted to give a testimony at my branch church's testimony meeting. But I thought I was too nervous to say anything. I soon realized, though, that I wanted to thank God and to share my ideas with the other people at church because maybe something I said would help someone. After listening for God's thoughts, I stood up and gave the following testimony.

I like playing baseball. I have played on a team in a league since I was in fourth grade. But whenever I got up to bat in a game I used to get scared that I would get hit by the ball. One day during a game I saw some of my teammates nearly get hit by the ball and I, too, was afraid of being hit.

Send a comment to the editors
NEXT IN THIS ISSUE
Testimony of Healing
Many years ago a growth appeared under my arm and despite... 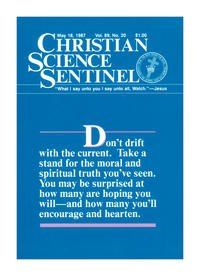