Ambition—does it have a place in the Christian's life?

I was talking to a friend once who was seriously concerned about what he considered a lack of ambition in his life. He was finding it difficult to follow through on necessary goals he had set for himself. Projects would lie half finished. And during that period, he felt there was little progress he could point to in his career. Instead there was frustration, a sense of stagnation.

To many people the word ambition is so often associated with a materialistic or self-centered life style that it doesn't quite seem to fit in with the usual concept of Christian living. Yet my friend is a dedicated Christian, and what he had perceived as a lack of ambition during that period in his life had posed a very definite challenge to him. It challenged his peace and his sense of worth and usefulness, until his prayer in Christian Science turned thought toward a more spiritual perception of life's purpose. 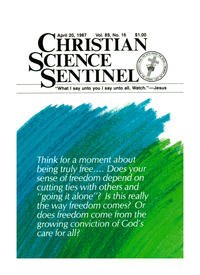