The only true advantage

Who has the advantage? The United States or the Soviet Union? A man or a woman? Toyota or Lee Iacocca? The Chicago Bears football team or the New England Patriots? It's a subject politicians and television anchormen debate, Hollywood dramatizes, Zurich assesses in international currencies, and newspapers headline. But who does have the advantage?

Do you have the advantage? Or are you fighting to get it, groping to hang on to it, or waiting helplessly while others determine it? The question implies a "one or the other" answer: you either have the advantage or you're at a disadvantage. The question is also typical of the way people often reason—from a strictly material basis, a basis devoid of God. There's little stability or reliability in such reasoning and very little peace or comfort! 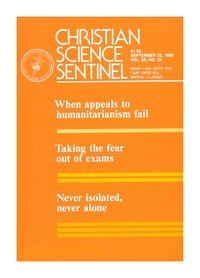