FROM THE COMMITTEE ON PUBLICATION

with contributions from NATHAN TALBOT, NATHAN A. TALBOT

Legal decisions on copyright matters aren't often widely reported in the press. Last summer's preliminary court decision (summarized in the October 7, 1985, issue of the Sentinel) on the copyright of the Christian Science textbook, Science and Health with Key to the Scriptures by Mrs. Eddy, was a significant exception.

The judge's decision rested on a constitutional argument. But much of the reporting was more sensational in nature, presenting a highly misleading impression not only of the specific issues involved in the case but also of Christian Scientists' church life in general. The plaintiff in particular assailed church members as "geriatric." 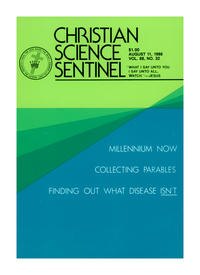