Before I became a Christian Scientist, the word "God" had...

Before I became a Christian Scientist, the word "God" had lost all meaning for me. I had a technical scientific education, and the material world with its seeming laws was all that appeared tangible to me. There were moments when I would wonder about the possibility of overcoming sickness, decrepitude, and death. But whenever such questions came to thought, I would conclude that physical science would some day manage to eliminate sickness and death.

I freely admit that I was a long way from believing in physical healing without the use of medication. So when I suffered sporadic malaria attacks, I always made it through by taking large doses of pills. I was not being healed by these measures. Rather, I was made temporarily more comfortable. The results of a clinical examination crushed any hopes I might have had of a complete cure through medical means. 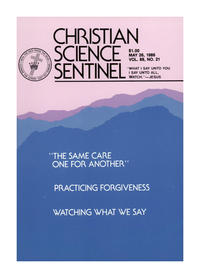