More than sixty years ago a copy of the Christian Science textbook,...

More than sixty years ago a copy of the Christian Science textbook, Science and Health by Mary Baker Eddy, was given to my parents as a wedding present. For the next three years, depending upon the mood of my mother when she cleaned the living room, the book rested either on an end table or in the bookshelves. Then my father contracted pleurisy, and there was great concern whether he would recover.

One evening my father's employer, a Christian Scientist, called to visit. That particular day the textbook was visible on an end table. Recognizing the book, the man asked if my parents had read it. When they said they had not, he recommended to them that the answer to my father's health problem might be found within its pages. That began their earnest study of Christian Science. My father was quickly and completely healed as a result, and both parents became dedicated students of Christian Science from that time on. (My mother's mother also became interested in Science at this time.)

Send a comment to the editors
NEXT IN THIS ISSUE
Testimony of Healing
My mother took up the study of Christian Science when I was... 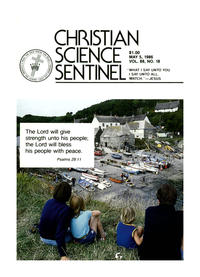