It has been almost five years since I have expressed gratitude...

Our oldest son, Bob, is an example of this. One day when he was in his place of business—a firm that buys and sells wastepaper—he went into the warehouse where the paper was being baled. Suddenly he was struck down as over ten thousand pounds of baled paper were accidentally pushed onto him by a forklift. The weight was so great that later the imprint of his body was found on the bale underneath him. Bob said he first thought, "This is it." Then he remembered a story I had told him when he was a young boy. It was an experience of a soldier who had been trapped under debris during battle. The soldier had prayed, and the explosion of a shell had opened a way of escape.

Send a comment to the editors
NEXT IN THIS ISSUE
Testimony of Healing
Before I knew of Christian Science I doubted even the existence... 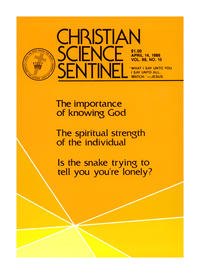