Have you ever put your thinking on trial?

A few years ago I was taking several friends on a scenic tour in a small airplane. The airplane was loaded beyond safe limits, yet I ignored the danger. When the landing gear was retracted after takeoff, the balance of weight was altered, which caused uncontrollable flight. The airplane continued climbing in a nose-up position. The projected consequences of this would be our losing flying speed, tailspinning, and crashing in a nose-down position.

My dear wife was sitting next to me and stated audibly, "God is right here with us." That statement of scientific truth certainly helped to rule out of my own thought any fear, and it strengthened my confidence in God's constant presence. I was divinely directed how to bring the airplane under control so that we landed in an upright position. Upon impact, the airplane caught fire, but the fire department quickly reached us and began extinguishing the flames. We walked away safely from the burning wreckage.

Send a comment to the editors
NEXT IN THIS ISSUE
Article
Health: "settled in heaven" 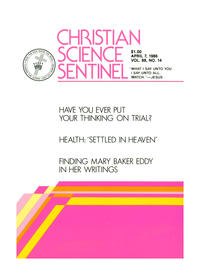