Good is the reality!

Late one night, suffering from a painful physical disorder, I reached out to God in prayer for healing. I had prayed about the condition many times before, for it had become a recurrent problem over a period of months. That night my prayer took the form of an earnest, wordless desire for deeper understanding of reality. Weary of pain and fear, I yearned to know what was really true of God and man.

As I opened my thought to the truth, the realization came, "Why, good is the reality!" It was as though I had been wakened from sleep. I glimpsed something of the truth that good actually is the reality of man's being, despite material appearances to the contrary. And I joyously accepted this truth deep in my heart. The result was complete and permanent healing that night. 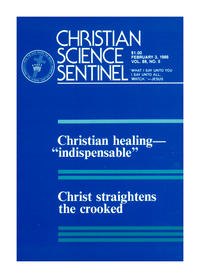