Soon after I began the study of Christian Science I learned of...

Soon after I began the study of Christian Science I learned of the wonderful healing power of gratitude.

Before I began this study, for several years I was treated by doctors for a severe back problem. However, the condition did not improve but grew worse. Then I was told that there was no cure for what they diagnosed as spinal arthritis. All they could do for me, they said, was to prescribe drugs to alleviate the pain. They had reached this conclusion after giving me many tests, X-rays, and so forth.

Send a comment to the editors
NEXT IN THIS ISSUE
Testimony of Healing
The healing power of the Christ, Truth, as taught in Christian Science... 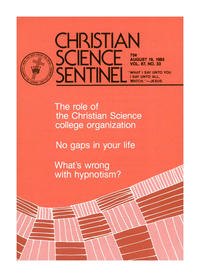