One year while I was in high school, attending a summer...

One year while I was in high school, attending a summer session, I began having trouble breathing. I would inhale large amounts of air and then have great difficulty exhaling it. These attacks occurred sporadically. My mother suggested that I call a Christian Science practitioner for help through prayer, which I did. Each time I called the practitioner, I was helped by the healing truths she shared with me from the Bible and from Science and Health by Mrs. Eddy.

During an attack one day, I again called the practitioner for help. As I was barely able to speak, the practitioner lovingly and audibly prayed for me until I was able to tell her what had happened. She affirmed that nothing could separate me from the love of God. After we talked that day I never again had breathing difficulties of any kind. 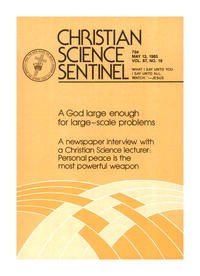