The Mother Church will appeal the "Plainfield case" decision

In mid-1983 the Chancery Division of the Superior Court of New Jersey ruled that a church not affiliated with The Mother Church cannot use the term "Christian Science" as a primary part of its name. (For more background on this so-called Plainfield case see "From the Directors" in the Christian Science Sentinel of August 8, 1983, p. 1357.)

In a split decision (two to one) an intermediate appellate court in New Jersey has now reversed this decision, holding that "Christian Science" is a "generic" term in the public's mind, not necessarily implying affiliation with The Mother Church. 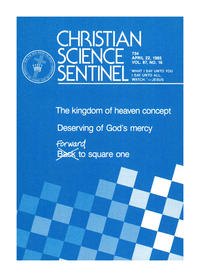