If you have been reading through this magazine and were previously unacquainted with Christian Science, you may have decided that Christian Scientists look at the world in rather a different way. That's true. And if you asked a Christian Scientist for an explanation of the nature of reality, the reply would admittedly be in contrast to common material views of existence.

A student of Christian Science might respond, for example, that for him ultimate reality comprises only that which is made by God. And because he believes God, who is all-knowing divine Mind, to be the only creator and to be all good, he concludes that what is actually real must be actually good—having no element of evil. Also, since God is omnipotent Spirit and ever-present Life, His creation, which represents Him perfectly, must be spiritual and eternal. Creation is ordered and governed harmoniously by divine law. Reality does not consist of matter or any quality that is temporal. Nothing in God's kingdom decays or is subject to chance or discord of any sort. 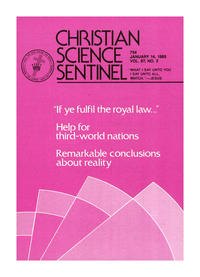