We call it "the winter of money from the fish's mouth." I'll never forget it! It was the year we discovered the limitless diversity of God's care for human needs.

At the beginning of the year my wife and I had gone over expenses for the coming months, adding up what could normally be expected in the way of income. And found ourselves woefully short.

We knew what to do. Christian Science had been showing us that the solution to any problem—any—is invariably found in a deeper acquaintance with the divine Mind, God, through prayer and Christian practice. We'd been learning that this perfect Mind is our own Mind, the infinite Mind of the real man and universe, and that it includes within itself every conceivable good.

So with this as our basis, we put aside our doubts and began to pray, confident that in the vast resources of Mind's caring love there was just the right idea or spiritual substance of what we were needing. And we knew that once seen, this idea or quality—wisdom, wholeness, obedience, whatever—could be expressed in daily deeds and so take form humanly in terms precisely relevant to our problem.

Speaking for all who have found in God the unfailing source of whatever they needed, the Psalmist says: "The eyes of all wait upon thee; and thou givest them their meat in due season. Thou openest thine hand, and satisfiest the desire of every living thing." Ps. 145:15, 16.

The Bible abounds with proofs of this heavenly provision: forty years of daily food for a migrant people in the wilderness; a pot of oil multiplied until it paid off a widow's debts with sufficient overrun for continued support of herself and two sons; thousands fed from a few loaves and fishes with surplus to fill twelve baskets. These and other Scriptural accounts came to thought, as well as instances read in testimonies from the Christian Science periodicals and heard at Wednesday evening testimony meetings.

We were beginning to see that from a scientific standpoint the unexpected, or so-called miraculous, was really the normal and divinely natural. Mrs. Eddy explains it this way in Science and Health: "The miracle introduces no disorder, but unfolds the primal order, establishing the Science of God's unchangeable law." Farther on she adds: "There is to-day danger of repeating the offence of the Jews by limiting the Holy One of Israel and asking: 'Can God furnish a table in the wilderness?' What cannot God do?" Science and Health, p. 135.

It became clear that our real necessity was less for material dollars and more for doing God's will and for a spiritual extension of thinking beyond the limited avenues of supply we'd been assigning to God.

As we explored the deeper significance of the "unexpected source," one particular incident in Christ Jesus' demonstration kept returning to thought. This was the occasion when Peter at temple tax time, obeying his Master's instructions, cast his book into the sea, drew up the first fish and found in its mouth the needed money for both of them. See Matt. 17:24-27 .

Why, we wondered, did Jesus choose such an extraordinary method of producing the tax money when other more usual means were surely within his ability? Was he saying something of particular importance in the uniqueness of this act? It seemed so. It seemed that he could have been telling Peter and all of us to put no limits on the endlessly original means of Mind's providing—that what we call the unexpected source is really Love, making its provision for man apparent to us in an infinite variety of ways.

This, then, was the particular idea we had been needing, this freedom from limiting God in our thought. And the idea took shape in practical terms as funds appearing in one surprising way after another, more than enough to discharge all our obligations.

The Mind that is Love shows its inexhaustible largess to each of us in marvelously original ways as we seek it. Whatever the need, we can reverse the belief of lack and find true substance, the spiritual idea, always translatable, when understood, in terms appropriate to the human situation, and acting as law, the law of infinite good from infinite sources. Mrs. Eddy clarifies this point when she writes, "Every material belief hints the existence of spiritual reality; and if mortals are instructed in spiritual things, it will be seen that material belief, in all its manifestations, reversed, will be found the type and representative of verities priceless, eternal, and just at hand." Miscellaneous Writings, pp. 60-61.

Money from a fish's mouth! Your needs, too, will be met as you acquaint yourself with the infinite diversity of Mind's giving to the seeker of spiritual ideas.

"Enough is a lot"

"Mamma, can we buy a cantaloupe?"My preschooler gazed longingly over the beautiful fruit display in the grocery store.His innocent question turned a knife in me. A fruit we all enjoyed se...

Our prayers for the economy

Through the years I have not hesitated to pray regularly about my own finances—whether to remove a sense of lack, to gain a better understanding of the reliability of God’s supply, or to entrust ju...

Finances: Investing in a shift of perspective

On this special edition of Sentinel Watch, our guest discusses how a shift in his perspective from a fear of lack to a spiritual understanding of God’s constant care and infinite goodness brou... 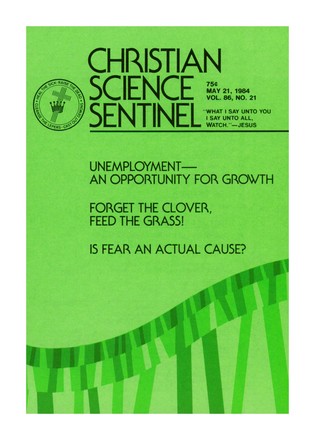 Forget the clover, feed the grass!

The lad with the loaves and fishes

What do you really want?

Money from a fish's mouth

Is fear an actual cause?

Christ Jesus said, "Ye shall know the truth, and...

One day a director of one of our business's largest and oldest...

Before my marriage I shared a flat with two other young...

One afternoon during the time that I was nursing our youngest...