When the early Christians were spreading the gospel, their preaching was very often attended by wonderful works of healing. Not only did the followers of Christ Jesus speak with conviction, but actual proofs of God's power and tender mercy marked their ministry with divine authority. Many people who heard these devoted workers couldn't fail to grasp the extraordinary significance of the preaching, for the spiritual vitality of the gospel message became apparent right in the listeners' own lives—as they were redeemed, made whole, healed by the Word of God.

In the first years after Jesus, there was probably no more vivid evidence of the power of God to regenerate hearts and minds than in the missionary work of the Apostle Paul. Among Jesus' followers, Paul stands out with a certain luminance, partly because of his own dramatic conversion and also because of the wide-ranging impact he had as he traveled throughout the Roman Empire shepherding the Christian Church.

Send a comment to the editors
NEXT IN THIS ISSUE
Article
"Beloved children, the world has need of you" 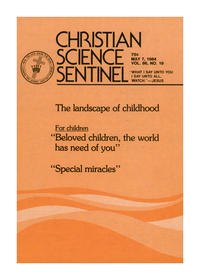