I left home when I was sixteen and stayed at my aunt's home...

I left home when I was sixteen and stayed at my aunt's home in New York State for a while. She had some copies of the Sentinel. When I saw what the periodical was, I was afraid to read it, because Dad had said that Christian Science was of the devil. All I knew about it was that Christian Scientists believed in healing.

Several years later, when my daughter Frances was about a year and a half old, she became very sick. She hadn't taken any food or liquid for three days. She was so seriously ill that she was limp. Her arms just dangled, and I had to put my hand under her head to hold it up.

Send a comment to the editors
NEXT IN THIS ISSUE
Testimony of Healing
I was eighteen years of age when I first attended a Christian Science Sunday School,... 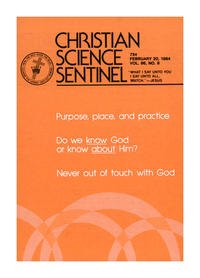