Rob grew up by the seacoast in the far north of New Zealand. He loved to take long walks along the deserted headlands that run out into the Pacific Ocean between golden, sandy beaches, and to sit on the rocky points where he watched the surf crash on the rocks and roll out onto the quieter beaches. In summer the beaches are fringed by the bright-red flowers of the pohutukawa trees and the tall-flowering flax. In older times the Maoris, who inhabited New Zealand before the Europeans arrived, made cloth and baskets from the flax.

One fine summer's day about Christmastime, Readers will recall that seasons are just the opposite in the Southern Hemisphere from the Northern Hemisphere. Thus when Christmas comes, it is summer in New Zealand. Rob went for a long ramble along a headland he'd never explored before. The sun sparkled on the waves, and the land smelled crisp and hot with the scent of the manuka scrub. But as he neared the point, the ground became shingly and slippery, so that it was dangerous to go on. Looking around for a safer way, Rob saw a narrow sheep track below him, along the edge of the cliff above the rocks. There was a good, solid flax bush on the track. If he skidded down the shingle, the bush would hold him, and he could walk to the headland. It was a pretty sight—the flowering bush perched on the cliffside twenty feet above the rocks with the blue waves surging against them. He felt the happiness of the lovely day as he slid down into the bush.

Send a comment to the editors
NEXT IN THIS ISSUE
Testimony of Healing
What greater opportunity can a child have than... 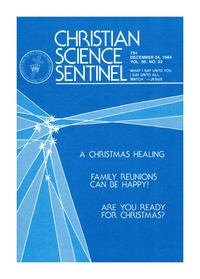