A spate of newspaper stories about Christian Science has appeared in the last year in the United States. These articles, developed mostly in the context of court trials, have often settled for the familiar stereotypes that make vivid headlines. They remind one of the local nightly news that so assiduously covers arson and conflict but pays little attention to the day-to-day life of the community. The viewer ends up knowing something about fires but not much about the community! 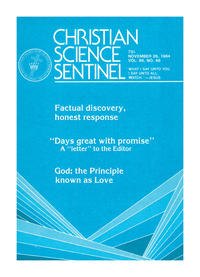