The study of Christian Science has brought me...

The study of Christian Science has brought me many years of happiness, health, and satisfaction. Years ago friends who saw my dire need for better health persisted in asking my husband and me to go to Christian Science lectures and church services with them. After we had accepted their invitations several times, a glimpse of spiritual reality stayed with me, and I started studying the Bible Lesson outlined in the Christian Science Quarterly.

At the time we had an infant and a child of eighteen months, and I was not able to care for them because of the illness that had been my lot for most of my life. (Earlier, doctors had told my parents that I would not live to adulthood.) About this time the family doctor called me to come in for a checkup. The examination, which included an X-ray, revealed a spot on one lung, which concerned us, as there was a history of tuberculosis in my family.

Send a comment to the editors
NEXT IN THIS ISSUE
Testimony of Healing
As far back as I can remember I had a problem with reluctance... 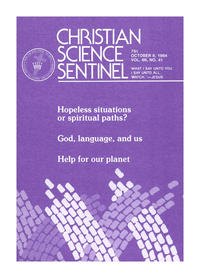