After having my second child (who was quite sickly),...

After having my second child (who was quite sickly), in the midst of other trials and disappointments including a troubled marriage, I reasoned that somehow there must be a depth to living I was not experiencing, something better than what the human scene alone offered. Surely, I thought, there is a higher purpose to life than just eating, sleeping, working, human pleasures and problems. This mental awakening stirred a desire in me to search for an understanding of God I could accept, and to find my real purpose in living.

Soon after, I joined a prayer group in the Protestant church where I was a member. Next I began visiting the city libraries and bookstores, trying to find books about or by people who had had "prayer experiences." Then, while attending meetings of this prayer group, I discovered that a dear friend in it had been raised in Christian Science. A few months later she gave me a copy of the Christian Science textbook, Science and Health with Key to the Scriptures by Mary Baker Eddy. As I read it, my questions were answered. I no longer needed to haunt bookstores and libraries. I felt satisfied. I was discovering that the only real God is good, a God of love, not the sender of sickness, hardship, pain, and death.

Send a comment to the editors
NEXT IN THIS ISSUE
Testimony of Healing
Gratitude to my mother for having raised me in Christian Science... 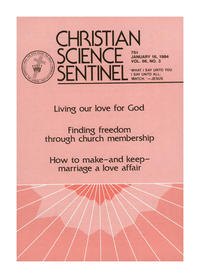