One evening I was invited to play tennis

One evening I was invited to play tennis. Now, I had played very often before but had had to give up the game on account of a ruined elbow joint. (This trouble had been diagnosed by a well-qualified surgeon a long time before I became interested in Christian Science.)

I could not resist the tennis invitation and I played, but after the game my elbow hurt as it used to in former times. However, since I had become a student of Christian Science and a member of the local branch Church of Christ, Scientist, I thought this was my opportunity to prove to myself that Christian Science lives up to its promises.

Send a comment to the editors
NEXT IN THIS ISSUE
Testimony of Healing
I became interested in Christian Science during a period in my... 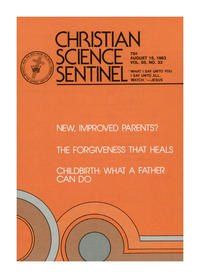