Many healings in Christian Science take place quickly. Often one clear glimpse of a specific spiritual truth wipes out the opposite lying supposition from thought and also its corresponding condition on the body. Many people tell of instances when with prayerful effort the truth became so brilliant to them that all thought of a problem simply vanished. Only later did they even realize that the physical evidence too had disappeared.

But what about the unyielding problem? What about the difficulty that seems to defy Truth and the dedicated work of both patient and Christian Science practitioner over a long period of time? Does lingering evidence of an ailment mean that Truth has not been seen or is ineffective? 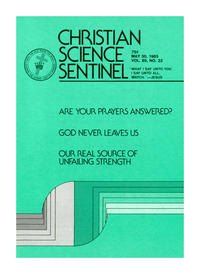