At a time when I was living in California, I embarked on a flight...

At a time when I was living in California, I embarked on a flight to Grand Rapids, Michigan, to spend the holidays with relatives. On our way we traveled through a heavy blizzard. This occurred shortly before we arrived in Chicago, where I expected to take another plane that evening for Grand Rapids. However, all flights were canceled, and ours was the last plane to land. All the passengers were sent to motels and hotels for the night.

The next morning I fell down a flight of stairs at the motel where I was staying and was taken unconscious by ambulance to a hospital. When I regained consciousness, I was lying on a table in an X-ray room. A doctor and nurse were standing by, ready to give me an injection of some sort. I told them I was a Christian Scientist and did not care for any kind of medication. Then I asked to be taken to a phone, as I wanted to call a Christian Science practitioner in California. 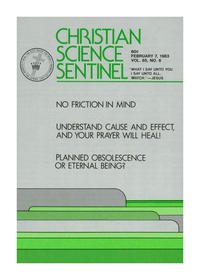