"The morning light is breaking"1

This year the religious world has noted with appreciation the five-hundredth anniversary of Martin Luther's contribution to religious history. His lifework, including his translation of the Bible into German, played a monumental part in liberating the forces that led to blossoming of the concept of religious freedom.

Mrs. Eddy speaks of Luther as "the intrepid reformer," Christian Healing, p. 2. yet he himself perhaps did not dream that his ninety-five theses, nailed to the church door in 1517, would change the religious world. But refusal of the authorities to accept his ideas led to the Protestant Reformation, which, because of the freedom of thought it established, helped to prepare the way for the discovery of Christian Science. In turn, the dawning of this great light of Truth has brought an epoch in which Mrs. Eddy could write: "Ages pass, but this leaven of Truth is ever at work. It must destroy the entire mass of error, and so be eternally glorified in man's spiritual freedom." Science and Health, p. 118. 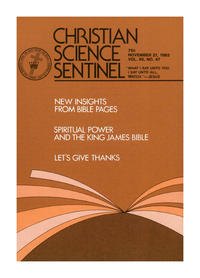