The glorious progression of God's plan

"God is working His purpose out," Hymnal, No. 82. says a hymn in the Christian Science Hymnal. God's purpose is that the whole earth be filled with His beneficial glory, His allness and love. And, truly, nothing can oppose His marvelous plan of salvation for all mankind from error, from sin, sickness, suffering, and death.

The star that shone of old to the wise men at the birth of Christ Jesus See Matt. 2:1-15 . announced the appearing of Truth in the human realm. This star continued to shine and led the searchers until they found Jesus, the human representative of Christ, Truth. It didn't make any difference to the great plan of God that darkness, malice, and the murderous intentions of those of worldly power and rank ambition would attempt to kill the God-sent messenger. They could not darken or hinder the radiance of this light. The star shone brighter and led sincere seekers to the Bethlehem babe. The God-idea and its human surroundings were protected. Despite everything! 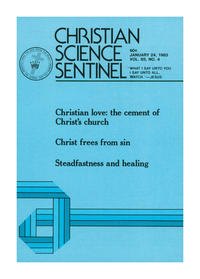