My first exposure to the teachings of Christian Science...

My first exposure to the teachings of Christian Science came through reading the religious article in a copy of The Christian Science Monitor. It helped me by calming certain fears I had at that time; this was the first of many comforting, healing experiences that resulted from my applying specific spiritual truths to human problems. Up to that time I had not been sympathetic toward or even interested in Christian Science.

Several years later, following the Korean War, my employment at an aerospace defense company was terminated during an overall economic downturn. The general thought at that time was very pessimistic about the possibility of finding a position in my field anywhere in the United States, much less in the Niagara Frontier section of New York State. However, having taken up the serious study of Christian Science and having become by then a member of a branch Church of Christ, Scientist, I clung steadfastly to omniscient, omnipresent, and omnipotent God for the solution to the problem. In fact, I was so confident in God's tender care for all His children that I purchased a new suit and overcoat in preparation for the interviews I was sure would come. And they did! 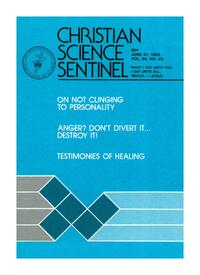