As a lifelong Christian Scientist, I have had many...

As a lifelong Christian Scientist, I have had many proofs of God's loving care. A healing of illness that took place nearly twenty years ago has been a cornerstone in my spiritual growth. All previous healings had been quick, but during the four months spent in working out this problem, I was forced to look more deeply than ever before for spiritual understanding.

This illness seemed to be the culmination of many unsolved problems. I was anxious about my husband's business, which had seriously declined. Also, as chairman of the executive board of my branch church, I had become concerned over what the church members might be thinking about my decisions. And I was especially concerned about some of their decisions. A source of further disturbance was the fact that even though my husband and I had agreed I would remain at home to raise our child, I felt a strong pull to return to my former profession as an educator. Faced with these problems, I would pray for a while—mostly on the run. But then I would find that mesmeric suggestions of self-pity, condemnation, and fear would usurp my joy to the point where I was suffering chronic pain. 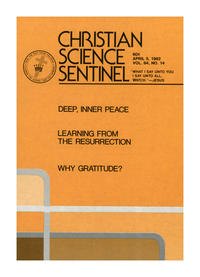