Every Christmas Eve during my childhood I would scan the sky and wish I could see the same great star the wise men had followed. Later in life I doubted the existence of any such star. Then a time came when my health and everything I valued seemed to collapse. I longed then not for a star in the sky but for a guiding light that would penetrate darkness and despair.

The first Christmas after I began studying Christian Science I found a statement by Mrs. Eddy that satisfied my need: "The star that looked lovingly down on the manger of our Lord, lends its resplendent light to this hour: the light of Truth, to cheer, guide, and bless man as he reaches forth for the infant idea of divine perfection dawning upon human imperfection,—that calms man's fears, bears his burdens, beckons him on to Truth and Love and the sweet immunity these bring from sin, sickness, and death." Miscellaneous Writings, p. 320. 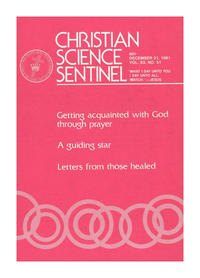