Many years ago I found Christian Science through a sister who...

Many years ago I found Christian Science through a sister who had been healed of asthma. I am increasingly grateful to have been led onto the path of spiritual truth. The constant fear of being punished by a harsh, judgmental God has been replaced by the comforting knowledge that one can commune directly with God, our tender Father, who provides only good for His children. This elevated concept of Deity has been a true revelation, and it has encouraged me to carry on. "To those leaning on the sustaining infinite, to-day is big with blessings" (Science and Health by Mrs. Eddy, p. vii).

Early in my study of Science, faced with overwhelming moral and physical problems that seemed irresolvable, I received proof that the Father supplies His children with everything they need. I was hospitalized with what the doctors had diagnosed as incipient cancer. They told me that without an operation I would no longer be able to work. Since I had to take care of my three very young children, it was impossible for me to remain inactive. So, after assuring the staff that I would take full responsibility, I asked to be allowed to leave the hospital.

Send a comment to the editors
NEXT IN THIS ISSUE
Testimony of Healing
I have gone to the Christian Science Sunday School since I was... 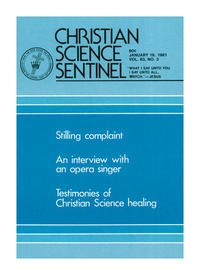