Come out of the cave

In a famous parable the Greek philosopher Plato tells of a group of people living in a dark cave, chained from childhood in such a way that their backs are to the cave's entrance, their faces toward a stone wall. Behind them a fire blazes. Other people carrying on their normal activities pass before the fire, their shadows thrown against the wall. The manacled ones, seeing only the shadows, believe the grotesque shadow-world to be the reality. Their entire life, thought, and conversation center around this illusion.

What would happen, the philosopher asks, if one of the chained men were freed and forced to look at the actual scene? "Would he not be perplexed and believe the objects now shown him to be not so real as what he formerly saw?" Francis MacDonald Cornford, tr., The Republic of Plato (Oxford: Clarendon Press, 1941), p. 224; Wouldn't this newly liberated man have to be educated so that he could see in the light and grow accustomed to reality?

Send a comment to the editors
NEXT IN THIS ISSUE
Article
CHRISTIAN SCIENCE PRACTITIONERS ... 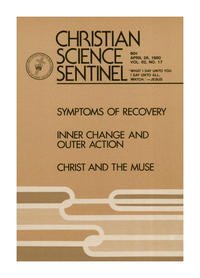