During the Second World War, I was training with the Royal Air Force in Canada. On my weekend leaves I stayed with a family of Christian Scientists, the first Scientists I had met. During our conversations, Science was sometimes mentioned, but it made little impression on me. Because I could see evidence of disease every day, I felt that anyone who said that disease is unreal was looking at the world through rose-colored glasses.

Toward the end of the training course, I was afflicted with a skin disease called scabies, which covered both thighs and was painful and unsightly. Medical treatment, received at the base hospital, brought no improvement. When the training course ended, I was transferred to another airfield, a journey that took two days by train. 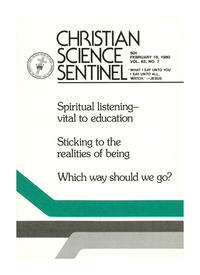