In 1974 I was an officer of an industrial company that was invited...

In 1974 I was an officer of an industrial company that was invited by the President of the United States to exhibit our product in a foreign country. (Sixty other engineering firms also sent representatives.) The plane in which we were flying got into difficulty. The right engine exploded, and a huge ball of fire was visible from the window. But we were able to land safely on the first leg of our journey, and at that time I called a Christian Science practitioner for help through prayer.

After a delay, the passengers were assured that the engine was repaired, and the plane resumed its journey. But in less than an hour, when we were over the ocean, the captain announced that because of mechanical difficulties we would return to our embarkation field. Two statements of Mrs. Eddy's came vividly to me: "No evidence before the material senses can close my eyes to the scientific proof that God, good, is supreme" (Miscellaneous Writings, p. 277), and from Science and Health (p. 520): "Unfathomable Mind is expressed. The depth, breadth, height, might, majesty, and glory of infinite Love fill all space. That is enough!" I could feel the practitioner's prayer dispelling my fear, and I felt secure. I was also confident that the pilot and the crew were responding to divine direction. We landed safely at our home field on a runway that had been covered with foam. Within eight hours the engine was replaced, and we were on our way again. This time we had a beautiful crossing.

Send a comment to the editors
NEXT IN THIS ISSUE
Testimony of Healing
A number of years ago, my daughter and I were left alone 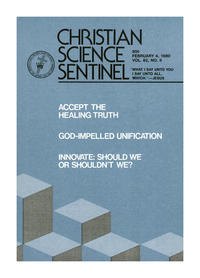