The whole atmosphere at a meeting was immediately transformed

Christian Science was introduced to my family by an acquaintance of my wife. Soon thereafter, my wife started leaving copies of the Christian Science Sentinel open to particular articles for me to read. I assumed that these articles were carefully picked so as not to be "controversial." I found, however, as I became more interested in the simple truths stated in these periodicals about God and man's relationship to Him, that all the contradictions that had made me unable to accept other religions were simply not there when it came to Science.

The true idea of man set forth in "the scientific statement of being" from the textbook, Science and Health by Mrs. Eddy, helped me to see myself and others as God's ideas and therefore as worthy of His love. One especially meaningful declaration reads (p. 468): "Spirit is God, and man is His image and likeness. Therefore man is not material; he is spiritual." 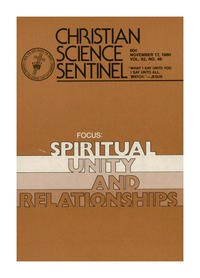