Several years ago, a friend was driving me to the...

Several years ago, a friend was driving me to the hairdresser when I suffered a severe stroke. She wanted to take me right to the hospital, but I insisted she take me home, because I knew my son would be able to help me. He immediately contacted a nearby sanatorium for Christian Scientists and drove me there.

A Christian Science practitioner was called, and he came at once to see me; I was at the sanatorium for over a year. During those months the practitioner visited me two or three times a week, sometimes every day. He and I would read the Bible Lesson in the Christian Science Quarterly out loud together. There were many verses from the Bible and statements from Science and Health with Key to the Scriptures by Mary Baker Eddy that we worked with along the way. This was most helpful (Science and Health, p. 393): "Mind is the master of the corporeal senses, and can conquer sickness, sin, and death. Exercise this God-given authority. Take possession of your body, and govern its feeling and action. Rise in the strength of Spirit to resist all that is unlike good. God has made man capable of this, and nothing can vitiate the ability and power divinely bestowed on man."

Send a comment to the editors
NEXT IN THIS ISSUE
Testimony of Healing
One day, during the time I was serving in the Royal Air Force in... 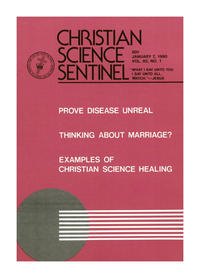