When I was a pupil in the Christian Science Sunday School,...

When I was a pupil in the Christian Science Sunday School, the stories in the Bible were made very familiar to me. One day I discovered that a wart had developed on the back of my hand. I waited for some time for it to go away, but it didn't. Finally I opened the Bible and turned to the first chapter of Genesis. I studied verse 31, which we had often read, "And God saw every thing that he had made, and, behold, it was very good." I reasoned that if God had made everything very good, He could not have made an ugly wart. Shortly afterward, the wart disappeared.

Later on, while I was expecting my first child, doctors anticipated difficulties with the birth and expressed concern for the child's health. I was very grateful for the availability of a Christian Science practitioner, who helped me overcome the fears that these negative predictions aroused. She cited many passages in the Bible and the writings of Mrs. Eddy on the subject of birth. Every day I studied the paragraph under the marginal heading "Scientific obstetrics" on page 463 of Science and Health by Mrs. Eddy. It includes these words: "To attend properly the birth of the new child, or divine idea, you should so detach mortal thought from its material conceptions, that the birth will be natural and safe." And it says further on, "When this new birth takes place, the Christian Science infant is born of the Spirit, born of God, and can cause the mother no more suffering." 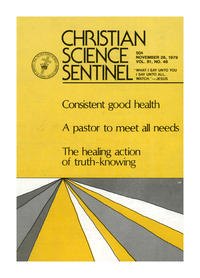