"Forty years without ever taking a pill?" The comment was accompanied by a gasp of wonderment. The speaker looked ruefully at the two or three pillboxes in her purse and admitted that these were only a sample of the collection of pills she had at home, on which she now had alarming dependency.

This woman is just one of millions who have become statistics in the recent reports on chemical addiction. Published figures indicate that easy availability of sedatives and stimulants, tranquilizers and painkillers, has led to slavery for more people than the population of the largest city in the United States. Recent sharp focus on the problem of chemical addiction has alerted many of them to the need to reclaim their freedom from dependency on prescribed medication and the even more easily available store-counter packaged drugs. 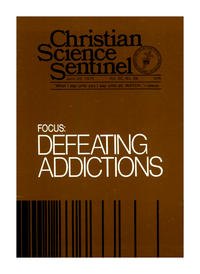