At the birth of our second daughter, I was aware that something...

At the birth of our second daughter, I was aware that something was wrong. I'd been working with a Christian Science practitioner during my pregnancy, and she had helped me to understand that God forms and creates each of His children spiritually and perfectly. This confidence enabled me to remain calm and trusting. The practitioner was asked to pray at this point, and within a short time the baby arrived safely. Later I learned that the child had been in a precarious position.

During this daughter's early development, it became evident that her motor skills and mental growth were retarded. While the case was never diagnosed by the medical profession, she had the symptoms of an autistic child. She was content to be alone in her own little world, and she developed idiosyncrasies that set her apart from other children. By the age of three she had never spoken a word. She also had an unnatural eye condition.

Send a comment to the editors
NEXT IN THIS ISSUE
Testimony of Healing
Through the earnest study of Christian Science we can learn... 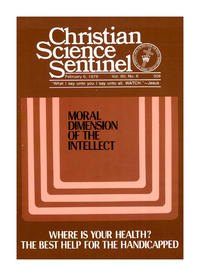