Anyone coming into Mark's darkened room might have thought he had simply fallen asleep on his bed with his clothes on. Far from it. He was straining to concentrate with every ounce of will in an effort to "astral project" or "soul travel." He'd picked up the technique from some books he'd been reading: the supposedly autobiographical adventures of a Tibetan lama. (He later learned they were written by an impostor living in Canada.)

At first the books were a welcome release from the humdrum of boarding school life. Reading about mysterious occult powers, rides in man-bearing kites, and narrow escapes from the Chinese Army was certainly more entertaining, he thought, than memorizing the parts of the tree for biology class. But lately Mark had begun to wonder if there might not really be something to it—if, in fact, he could develop mystical powers that no one, and certainly not his classmates, believed he possessed.

Send a comment to the editors
NEXT IN THIS ISSUE
Testimony of Healing
I have been a student of Christian Science for many years... 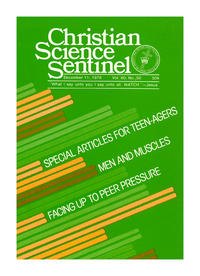