My colleagues in journalism held The Christian Science Monitor in...

My colleagues in journalism held The Christian Science Monitor in such high esteem, that I looked into this religion. At the time I had thought the claims of healing and regeneration through a study of Christian Science sounded too fantastic. Practicing Christian Science I felt wouldn't be easy because I thought I couldn't give up cigarettes. I read Science and Health with Key to the Scriptures by Mary Baker Eddy a number of times, and although I quit smoking, I was bothered by feelings of missing it. Then a friend told me of a Christian Scientist who said he once had a desire for a cigarette, even though he'd never smoked. This really opened my eyes! I realized that this was not a weakness of my personal character, but a general temptation, which I could deny with the spiritual fact expressed in Mrs. Eddy's words (Science and Health, pp. 517-518): "Man is not made to till the soil. His birthright is dominion, not subjection. He is lord of the belief in earth and heaven,—himself subordinate alone to his Maker." The desire to smoke left me.

After studying this Science for just four years, I am amazed at how wonderful my life has become! My family and I rely on it daily. We have had consistent healings of physical ills and have found good solutions for financial and personality problems. 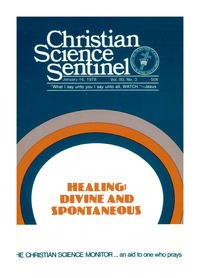