My heart is filled with gratitude for the many blessings that...

My heart is filled with gratitude for the many blessings that have come to me through the study and application of Christian Science. I had been under the care of a doctor and was told that nothing further could be done for me. During the interview the kindly doctor asked me, "Do you believe in God?" I told her I did, but on the way home I thought, "How can you believe in anything you do not know or understand?" I began reading the Bible every day. One verse in particular became my steady companion (Ps. 119:18): "Open thou mine eyes, that I may behold wondrous things out of thy law."

Some years before, I had been told about Christian Science by an aunt who attended services in a branch church. I had also purchased Science and Health by Mrs. Eddy, but I had put the book aside because I thought I could not understand it. One day I opened a box that had been stored in a closet and out fell Science and Health into my lap. As I picked up the book I read this passage (p. 306): "Life demonstrates Life. The immortality of Soul makes man immortal. If God, who is Life, were parted for a moment from His reflection, man, during that moment there would be no divinity reflected. The Ego would be unexpressed, and the Father would be childless,—no Father." The words seemed to stand out. I felt a peace, freedom, and joy I had never known before. What could not be healed by medical science was healed then and there, and I knew it! A fear of death that had plagued me for some time was healed too. I read this wonderful book every moment I had; I was so hungry for what it gave me, and it has satisfied me ever since.

Send a comment to the editors
NEXT IN THIS ISSUE
Testimony of Healing
My gratitude to God for His constant love and goodness is... 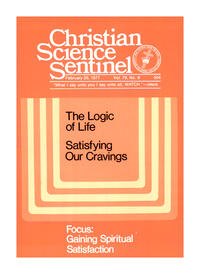