As my parents were students of Christian Science, I was enrolled...

As my parents were students of Christian Science, I was enrolled in the Christian Science Sunday School at a very young age. My growing years were blest by the enlightenment gained from inspired teaching. When problems occurred, my parents immediately applied the truths of God and man explained in Science and Health by Mrs. Eddy, and again and again harmony was regained. While still a teen-ager I began to serve as soloist in a branch Church of Christ, Scientist. This brought much spiritual growth.

At one time I was employed in an office with many other women. I had an infection on my hands. Some of my co-workers feared it was contagious, so I asked to be allowed to remain home until the difficulty was cleared up. This request was granted. Soon the condition affected my feet and was so uncomfortable that I found it difficult to be still more than a few minutes at a time. I could not bear to wear shoes. 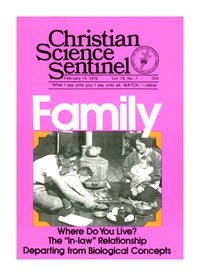