Do we react with horror, dismay, disgust, or anger to the evil that seems so prevalent today? If so, we need to remember that Mrs. Eddy has revealed to us the nothingness of evil and given us the means of spiritual control with which to nothingize its false claims. Recognizing the astounding claims that evil in its various forms makes on human sense, she challenges us with the question: "But why should we stand aghast at nothingness?" Science and Health, p. 563; To the extent that we react emotionally to the magnified claims of error, or the belief of a power apart from God, we are assuming its somethingness, and are, in consciousness, according it reality, power, or intelligence. This serves only to reinforce its claims rather than control and destroy them. We are justified, however, in rising in rebellion against evil, not as a reality, but against its presumptuous claim to reality.

What seems to be evil is but supposition, the shadow cast by a false claim. Good can never be blocked out, and darkness, or ignorance, is not a reality. There is no need for us to stand aghast at error's shadow if we use the control we have been given in Christian Science to correct confused thinking. 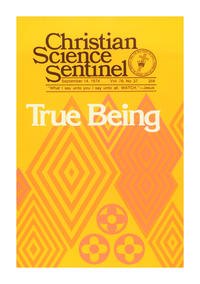